Did St Patrick come from Britain or Brittany?

A new book written by a Wicklow-based Church of Ireland clergyman looks set to challenge long held traditions about the country’s national saint.

‘Rediscovering Saint Patrick: A New Theory of Origins’ has just been published by Columba Press.

Did St Patrick come from Britain or Brittany?

A new book written by a Wicklow-based Church of Ireland clergyman looks set to challenge long held traditions about the country’s national saint.

‘Rediscovering Saint Patrick: A New Theory of Origins’ has just been published by Columba Press.

The author, Rev Marcus Losack, is a lecturer and pilgrim leader and he believes his research has located the true origins of St Patrick.

While historical details on the national saint remain sketchy, it is known that he was captured from his home by pirates when he was a teenager, and sold into slavery in Ireland.

The young Patrick managed to escape after seven years but returned to Ireland years later as an apostle of the Christian faith, leading to him becoming the most celebrated Patron Saint in the world.

However, the exact location of St Patrick’s homeland and the place where he was taken captive have been lost to historical memory.

The question Rev Losack’s book sets out to answer is whether St Patrick came from Britain or Brittany? Four years of historical sleuthing has convinced him that it was Brittany.

In St Patrick’s Confession, the Saint’s own account of his life which is written in Latin, he mentions certain places that have never been clearly identified.

“The established theory which most scholars accept is that he was taken captive from somewhere in Britain – some say Scotland, others Wales and others say south west England. But there has never been any real evidence provided to support that tradition.”

However, on a visit to Chateau de Bonaban near St Malo in Brittany some years ago, Rev Losack, who is a graduate in theology from Christ College in Cambridge as well as the Irish School of Ecumenics, learnt that the site on which the chateau was built contained remains dating from the Roman era.

A local tradition claims that the first building on the site belonged to St Patrick’s father, Calpurnius, a Scottish noble who settled there to avoid Saxon forces who were invading Britain. 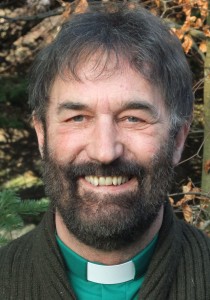 This ancient tradition claims that one day, Irish pirates crept up through a local wood called Quokelunde before they attacked the estate and burned it to the ground. St Patrick’s mother and father were both killed during the frenzy. Only the youngest son, Patrick, survived from the slaughter, before being abducted and sold as a slave in Ireland.

“At that time, this place was called Bonavenna de Tiberio. In St Patrick’s Confession, he tells us he was taken captive when Irish pirates attacked his father’s house at ‘Bannavem Tiburniae’ in Latin.” The names bear an uncanny resemblance and three other place names mentioned in St Patrick’s writings also tie in with areas around the Chateau de Bonaban.

“The other thing that really caught my eye was the pirates creeping up through that forest called Quokelunde, because I immediately thought of the Wood of Foclut in his Confession.

“He tells us about a dream he had – of hearing the voice of the Irish calling to him from the Wood of Foclut. My intuitive feeling was that the forest of Quokelunde, which surrounded his father’s house on that site could be what Patrick was referring to in the Wood of Foclut. This is what led to the research.”

He found “lots of secondary sources – old manuscripts that pointed in the direction of Brittany not Britain.”

At the library in St Malo, he found a Breton historian called Robidue who was writing in the 19th century. He provided an historical context for that attack by the pirates, claiming it happened in 388AD when the leader of the Roman legions in Britain – Maximus – launched a rebellion against the Emperors.

“This is what makes it a new theory of origins. It is saying that all those four places which Patrick mentioned, which we have never been able to identify, were probably all located in a small coastal region of Brittany in what is now France. Around this ancient site where Chateau de Bonaban is now located.”

Rev Losack would like to see an archaeological excavation carried out on the chateau as a way of possibly confirming his theory. He is currently in negotiation with the new owners of the chateau, a hotel consortium from Indonesia, to see if this is possible.

Roman remains were discovered in the basement of the chateau in the 1870s. Unfortunately those remains have been lost with the renovations on the Chateau in the intervening years – they were buried in a dump.But he is hoping that a dig would reveal other evidence of a Roman settlement.

“I think if there was an archaeological dig on that site and Roman remains were found, which I think they would be, that would be the best evidence ever to confirm that St Patrick was taken captive from that place.” 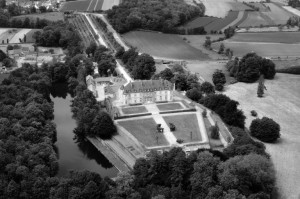 An aerial shot of Chateau de Bonaban. Lake in the foreground of this ancient, walled site was described by several early Breton historians as the place St Patrick called ‘Bannavem Tiburniae’ in Latin, where his father Calpurnius owned an estate from where St Patrick was taken captive when he was sixteen years of age.

“What has been missing is really conclusive local evidence,” he explained. That is why he believes an archaeological dig could reveal the truth of Ireland’s national saint and threw a new light on our history.